{TEASER TUESDAY}: Time to Move On?

Only two weeks until Everlasting Hope releases into the wild! Who else is excited??

As I mentioned in last week's #TeaserTuesday post, this is Abby's story, and there's a lot happening with all of the characters that you've grown to love. But poor Abby is really struggling, and she's drowning in grief. Chloe tries so hard to help her, but Abby's a bit... resentful of her cousin. So, of course, Jax jumps in and offers his unique brand of help. Read on ;-) 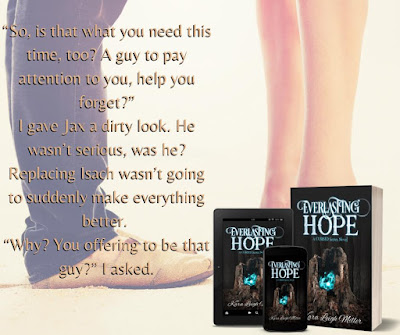 “Want to tell me what’s going on around here?” Arms crossed, I slouched back and stared at the TV.

“What do you mean?” Jax’s gaze never wavered from the game.

He glanced over at me, the corner of his mouth lifting in an almost smile, his blue eyes sparkling with mischief. Whoa. The breath rushed from my lungs at the sight of him looking at me like that. Anyone with half a brain would agree Jax was sexy, but when he gave that look? I had to refrain from fanning my face with my hand. Chloe told me once that this very look Jax was currently giving me was his I’m-going-to-say-something-to-piss-you-off look, but it had never failed to make Chloe’s heart race. I could totally understand why.

“We’re all wondering the same thing.” He returned his attention to the TV.

“What?” I asked, confused. “Please just stop with all this... whatever this is. It’s not cute or funny.” I huffed and glanced up at the ceiling to collect my thoughts. “Chloe once told me that you were the only person who wouldn’t sugar coat things, that you always told her how it was, even if she didn’t want to hear it. Can you please do the same for me right now?”

Jax paused the game, tossed his controller onto the table next to Wyatt’s, then twisted to look at me. “Chloe talked to you about me?”

I rolled my eyes. “You’re pathetic, you know that?”

He laughed, and despite my mood, I laughed, too. Jax leaned back so we were shoulder to shoulder, and the physical contact set off a chain reaction of conflicting emotions. The touch was both comforting and disconcerting. On one hand, I missed the intimacy of having someone—a guy—close to me like this. On the other hand, I couldn’t shake the guilt and awkwardness. For so long, Isach had been the only man to touch me, and this was Jax, the guy who was still very much in love with my cousin.

“We’re just worried about you. That’s all,” he said.

I shifted to put some space between us but didn’t say anything.

“We know you’re not handling things very well, but we have no idea how bad it really is because you refuse to talk to anyone about it,” he continued.

My chest constricted at his words. Chloe hadn’t been lying when she said Jax would lay it all out with blunt honesty. I was no longer so sure I wanted to know what was going on.

“I tried to talk to you this morning, and you barely said anything. Chloe’s tried every day since Isach’s death, and you’ve shut her out. Even Trent tried to offer some help.” Jax shook his head. “We’re at a loss how to help you, Abby.”

I swallowed around the lump in my throat. “You mean you haven’t asked Whitney or Wyatt to read my thoughts?”

“They offered, and Chloe threatened them with severe bodily injury if they invaded your privacy like that.” His lips twitched with a smile. “She even made me fear for my life, and I wasn’t the one doing anything wrong.”

“For once,” I muttered, which earned me another deep laugh from Jax. “I really do appreciate everyone’s concern. I do. But I need to deal with this in my own way. When Rachel died, I locked myself in my room and didn’t come out for days. Same thing when Marc died. But eventually, I came around. I will this time, too, but it’s going to take a little longer.”

Jax nodded. “What helped after Marc and Rachel died? What made you want to start living again?”

“Isach,” I whispered and closed my eyes. “He made it so easy to forget all the pain. Of course, back then, he’d been using me. Probably used his magic, but at least it had helped.”

“So, is that what you need this time, too? A guy to pay attention to you, help you forget?”

I gave Jax a dirty look. He wasn’t serious, was he? Replacing Isach wasn’t going to suddenly make everything better.

“Why? You offering to be that guy?” I asked.

Haven't started the series yet? No problem!

You can get Eternal Curse: The Cursed Series, Book 1 for FREE!