{TEASER TUESDAY}: A Story of Hope

Everlasting Hope is set to release in exactly 3 weeks, and I couldn't be more excited for this book. I mean, I'm excited for every book I write and release, but this one is like the cherry on top of a sundae.

This book is Abby's story and how she's dealing after the events in Eternal Life. (Hint: she's not coping well.) At the core, this is a story about hope and not giving up, which is fitting for a lot of people, I think. Especially authors who are constantly told not to give up, to keep going and trying and persisting. It was fun to explore these same concepts in a different context.

Abby's book really is the culmination of so many things. We get to see a lot more of Jax (YAY!) We meet some new and highly interesting characters (more YAY!) We reunite with some prior characters, and I think the reasons why will be surprising.  We learn that not all alliances are created equal, and you can't always trust those closest to you.

Needless to say, there's a LOT going on in this book. So, who wants a teaser?? 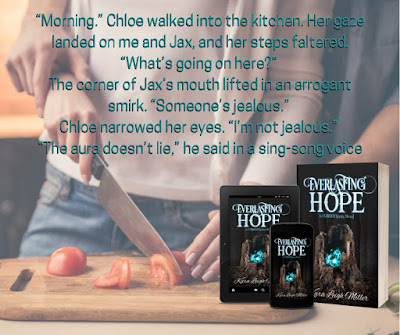 “What’re you cooking?” I asked.

“Bacon, scrambled eggs, and toast.” He moved gracefully from the stove to the toaster. Even though he wasn’t exerting himself, his muscles still strained beneath his blue T-shirt.

No wonder Chloe had been torn between him and Trent. They were both gorgeous in their own ways, and they were good guys, too. Kind, compassionate, funny, loyal. They’d both move heaven and earth for those they loved. They were like Isach in that respect. God, I missed him so much.

Jax set a plate of food in front of me, and I inhaled deeply. My stomach rumbled. He planted his hands on the counter and shifted his weight forward as he studied me.

“You’re not as gray as you were last night.”

“What’s that supposed to mean?”

He shrugged, straightened, then crossed his arms over his chest. “You tell me.”

I rolled my eyes. I’d forgotten he could see a person’s aura and determine their emotions. Talk about annoying. Between him being able to do that and Whitney and Wyatt being able to read thoughts, I was walking on proverbial eggshells. Maybe moving in here wasn’t such a great idea.

I grabbed my fork and scooped eggs into my mouth. Swallowing, I said, “Everyone keeps telling me things will get easier with time. Maybe that’s finally happening.”

“Hmm.” Jax turned away from me, fixed himself a plate, then returned to sit beside me.

Head down, I focused on my food so I wouldn’t have to say anything, or risk him figuring out what I was trying to keep hidden.

“Believe what?” I glanced over at him, and he met my gaze. His eyes were full of compassion.

“That loss and grief gets easier with time. It doesn’t. We just get better at handling the pain.” He averted his gaze and shoved a slice of bacon into his mouth.

Momentarily stunned, all I could do was stare at him. What did he know about loss? I opened my mouth to ask him, then snapped it shut. Chloe had told me all about Hannah, how Jax had loved her and how tragically he’d lost her. He’d also lost Isach, too, though I wasn’t sure those two were quite as close as Isach and Trent had been.

“Morning.” Chloe walked into the kitchen. Her gaze landed on me and Jax, and her steps faltered. “What’s going on here?”

The corner of Jax’s mouth lifted in an arrogant smirk. “Someone’s jealous.”

“The aura doesn’t lie,” he said in a sing-song voice.

Chloe huffed and shook her head, but I didn’t miss the almost smile she fought to hide. Only then did it hit me that Jax, in his own bizarre way, was mourning the loss of Chloe. He loved her, and she hadn’t chosen him. He’d lost the woman he loved. My heart softened toward him and what he was going through. I wondered what was worse—knowing the person you loved was dead and you’d never see them again, or seeing the person you loved every single day as they went about their life in love with someone else.

Haven't started the series yet?  No problem!

You can now get Eternal Curse: The Cursed Series, Book 1 for FREE!