Only 1 week left until you can get your hot little hands on Everlasting Hope! So, just for you today, I'm sharing a scene that was quite unexpected, not just for the characters involved, but for me as well. I had toyed with the idea of letting his happen, but as I was writing, it just didn't feel natural. Then BAM! 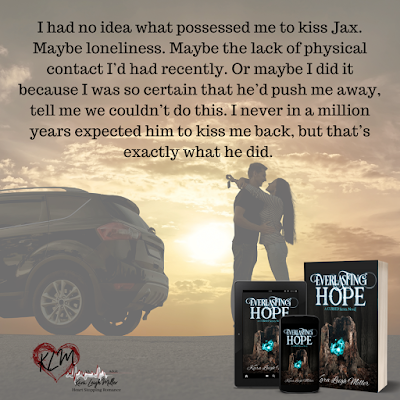 I had no idea what possessed me to kiss Jax. Maybe loneliness. Maybe the lack of physical contact I’d had recently. Or maybe I did it because I was so certain that he’d push me away, tell me we couldn’t do this. I never in a million years expected him to kiss me back, but that’s exactly what he did.

He tangled his hand in my hair at the base of my neck, holding me in place as his other hand trailed down my arm and side until his fingers curled around the curve of my waist. I shivered at his touch, but I didn’t pull away. Neither did he.

His tongue flickered across my bottom lip, and I didn’t hesitate to part my lips and welcome his kiss. With a groan, he backed me up until I was pressed firmly against the car, and then he kissed me hard and deep. I snaked my arms around to the back of his neck and locked my fingers. I whimpered, and he kissed me even harder until I was certain I’d pass out from a lack of oxygen.

Then, he released me, and my body sagged. If not for the car at my back, I would’ve crumpled to the ground. Jax’s chest heaved with his hard breaths, and I focused on that rather than risking a look at his face. I wasn’t sure I wanted to see whatever emotion would be reflected in his eyes.

The only sound louder than the creatures in the bayou was my pounding heart. Why had I kissed him? Why had he kissed me back? What did any of this mean? I swallowed the lump in my throat and licked suddenly dry lips. Slowly, I released my hold on the back of his neck and let my trembling hands trail down his arms.

“Are we done here?” he asked, his voice raspy.

Haven't started the series yet? No problem!

You can get Eternal Curse: The Cursed Series, Book 1 for FREE!