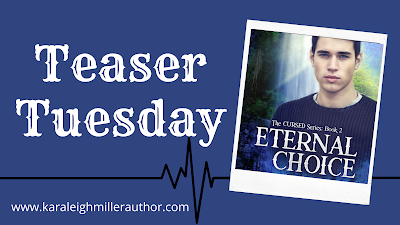 Only 1 week to go before ETERNAL CHOICE is out in the world! I can't believe it's so close already -- feels like the time has sped by. And I've admittedly been a little out of it leading up to this release, but here we are, so let's do this!

It's time for another #TeaserTuesday!
This second book in the Cursed Series is all about choices, specifically some really tough choices Chloe needs to make. Here's the biggest one of all...

I wasn’t sure I had an answer other than I wanted to know what it felt like to be bitten. If I decided to change, he’d have to bite me, and I needed to know I could handle it. And, whether out of selfishness or pure jealousy, I needed to know I was just as special as whoever else he’d bitten like that.

“Like I said. It never means anything, okay?” he said with an air of finality.

But I wasn’t going to give up so easily.

“See, that’s where you’re wrong.” I shifted so I was kneeling between his legs, facing him. “Every single time you touch me or kiss me, it means something, Trent. At least, it does to me.”

He took my face into his hands and peered into my eyes. “It means something to me, too, Chloe, which is why I don’t want to do this. I don’t want to cheapen what we have by getting you high from my bite.”

I disagreed, but I didn’t want our little disagreement to turn into a full blown fight. “Is that the only reason?” I asked.

He tilted his head, studying me through narrowed eyes. “Months ago, you wouldn’t even ask me how a person became a vampire, and now you can’t stop asking me about feeding and biting. What’s going on?”

“In case you forgot, I have a decision to make, and I’d like to have as much information as possible. Is that so terrible?” I asked.

And the more time I spent with Trent, the more I fell in love with him, the farther away my human dreams got, because I didn’t want any of it if I didn’t have Trent by my side.

His head fell back against the chair, and he groaned. “You’re killing me, Chloe.”

“I’m killing you?” I snorted. “That’s kinda hard to do when you’re technically already dead.” 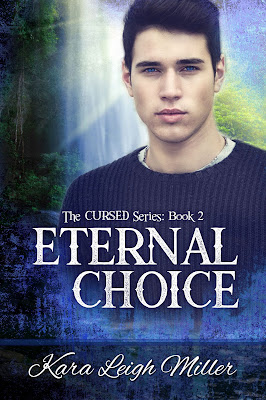 Forced to move to California with her father, the same man who abandoned her ten years ago, Chloe is once again starting over. Only this time, she has a perky new stepmom and an annoying baby brother. To make matters worse, the sea of snobby rich kids at her new prep school pretend she's invisible. As if all that wasn’t bad enough, she has this gnawing sensation that she’s forgetting something important.
And then Trent Halstead crashes back into her life, bringing with him everything she's forgotten and the devastating news that there’s a coven of witches after her, and no one knows why—until Chloe discovers the answer in a box of old family photos. Now, she's keeping a secret that could save Trent's life. There’s just one problem: his salvation will come at a cost. Her destruction. And that’s a price she’s not sure she’s willing to pay.
You can now Pre-Order ETERNAL CHOICE!
Don't forget to add it to Goodreads, too!
at 6:00:00 AM